Spice master, Mirfayz Ubaydov, who owns and operates the premier spice shop and the Silk Road Tea House restaurant in the old city of Bukhara, is following in the footsteps of his ancestors. The family of Ubaydov has been involved in the spice trade for more than 600 years. Not only does he custom blend the different herbs and spices, he will also give you ideas on how to make your food tastier and healthier.

Ubaydov's spice shop is located in the center of old Bukhara, at the Second Cupola.

In previous times, wholesalers used to bring spices to the spice shop from Saudia Arabia, Iran and India, traveling by way of the Great Silk Road.

During the 70 years in which Uzbekistan was occupied by the Russian Communists, no one was allowed to have a private business. In 1932, Stalin's repressive measures stopped Ubaydov's grandfather from continuing involvement in the spice trade. It was not until 1970 that Ibodullo Ubaydov, the father of the present owner, was permitted to once again be involved in the spice trade.

In 1980, Ibodullo re-established the family business, and managed to teach his son Mirfayz the logistics of running the business.

In 1986, after Ibodullo passed away, Mirfayz inherited the spice shop in Bukhara.

Mirfayz also deals with a variety of antiques: silken caftans, jewelery, and hand made carpets (Turkmen, Afghan, Caucasian and many other kinds) as part of his business. 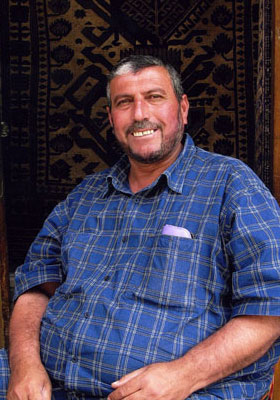